It was with a heavy heart last Spring that we postponed our bi-annual 2020 Jane Austen Days in Philadelphia. Fast forward a year and we are still not able to meet in-person safely or responsibly for our seminal Jane Austen event. However, we are not going postpone again. Instead, JASNA Eastern PA, along with our co-sponsor, The Free Library of Philadelphia, are excited to announce that for 2021, Jane Austen Day in Philadelphia will go virtual and become… 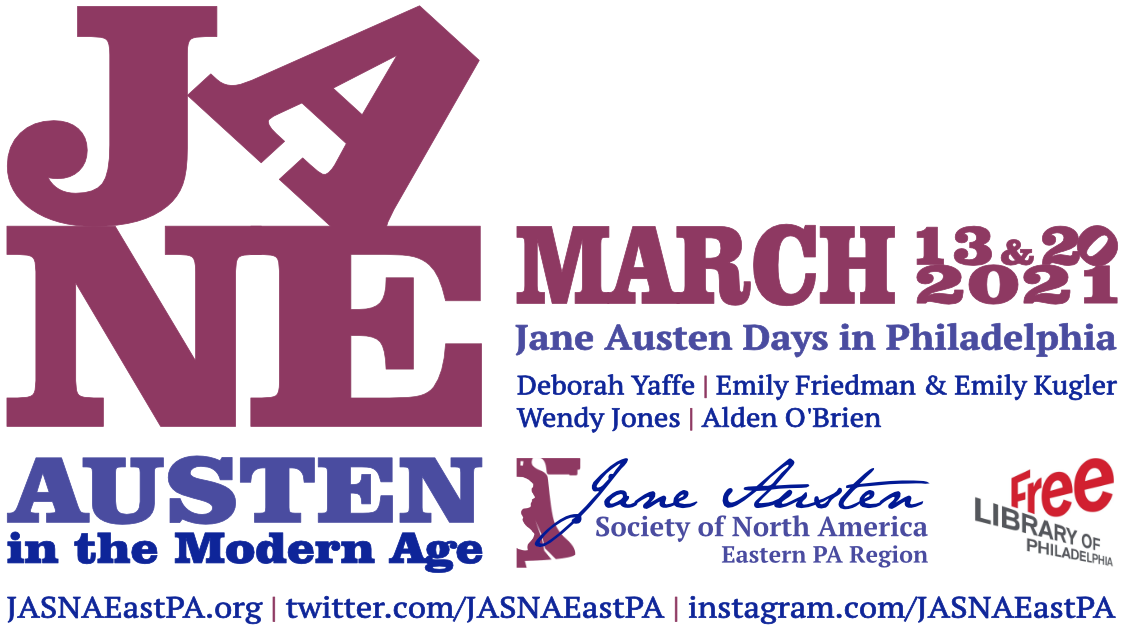 On Saturday, March 13th and Saturday, March 20th, we will be hosting a multi-day event, that continues the much-loved tradition of our bi-annual event, just expanded into a new 2-weekend virtual format! We are excited to have four amazing plenary talks, all focused on the 2021 Jane Austen Days in Philadelphia central theme of Jane Austen in the Modern Age.


The 2021 Jane Austen Days in Philadelphia explores and celebrates Austen’s significant and enduring influence on numerous contemporary disciplines and societal issues. Our critically acclaimed and esteemed speakers will focus on Austen’s impact in the modern age by exploring a myriad of timely topics ranging from racism, fanfiction, video games, and costume design. Each talk will include an interactive Q&A session with the speakers, and each day will include a special giveaway (or maybe even two).


The response we received from our 2020 online Teatime events has been amazing. We are very happy that so many of our fellow Janites enjoyed them! We also know that many people are still dealing with personal and financial hardships related to the COVID-19 pandemic. Given this, I am pleased to announce that both days of our Jane Austen Days in Philadelphia will be FREE and they are open to anyone interested in Jane Austen!


To register for either or both days, please visit the following links. Please take note that if you want to attend BOTH days, you will need to register for EACH DAY separately.


After registering, you will receive a confirmation email containing information about joining this online event.

Here is our Jane Austen Days in Philadelphia Speaker/Talk line-up for each day:


Deborah Yaffe
“Which Jane Austen? Fans, Fandom, and Fanfiction in the Age of Austen-Appreciation”
Jane Austen isn’t just a popular writer: she’s a writer whose fans hold widely divergent views of what she cares about, what she stands for, and what she’s asking us to think, and think about. When you buy a Jane Austen scented candle, consult online lists of her lessons for twenty-first century living, or pick up an Austen-inspired romance novel, you’re meeting very different versions of Jane Austen. What do these clashing interpretations tell us about her -- and about ourselves?


Dr. Emily C. Friedman & Dr. Emily M.N. Kugler
“Before Bridgerton: Austen-Inspired Games and the Challenges of Representation”
In this talk, Em (Friedman) and Emily (Kugler) will be your guides through the world of Austen-inspired indie video games: from dating simulators and visual novels to satirical strategy games. Kugler and Friedman will show how to access, play, and read these games, with special attention for the ways in which these indie games anticipate the challenges faced by big-budget film and TV Regency adaptations.


Wendy Jones
“Caste-ing Characters in Jane Austen”
At the 2020 AGM, one of the issues discussed in a plenary panel on Reading Austen’s Juvenilia in the Twenty-First century was the need to extend Austen’s readership to a more diverse audience. Along similar lines, a special issue of Persuasions On-Line, to be published this summer (2021) seeks to explore Austen through the perspective of race and other minoritized identities subject to inequity including “ethnicity, gender identity, ability/disability, culture, and class” identities. If we look for overt references to race in Austen’s works, we find Miss Lambe, a “mulatto,” in Sanditon and Sir Thomas’s business dealings in the West Indies, certainly involving race slavery, in Mansfield Park. Austen’s relevance to race and by extension to a readership inheres not in her representation of race per se, but in her portrayal of the attitudes and practices that sustain racism and other forms of oppressive othering—what Isabel Wilkerson has called “casteism.” Casteism pertains to socioeconomic status in Austen’s novels, but its mechanisms are the same as those that have sustained racism throughout modern Anglo-American history. The representation of casteism in addition to—and opposed to—less toxic forms of prejudice explains the tremendous popularity of Pride and Prejudice with authors who identify as people of the global majority, as seen in their translations of this novel into other cultures and times.


Alden O’Brien
“Costuming the Regency from the Bennets to the Bridgertons: Historic Sources and Designers’ Choices”
Costumes in period dramas not only set the scene, but function as visual clues to characters’ status and relationships. They also communicate the director’s ideas of mood and theme, as interpreted by the designer. Designers balance “accuracy”—an elusive goal—with creativity and, often, budget limitations to come up with a more or less successful Look. This lecture analyses costume designs in Austen and other Regency-era adaptations including the recent Bridgerton series. What historic sources (portraits, fashion plates, and extant garments) were used, and where and why did some designers depart—to smaller or greater degree—into artistic license? What can we “winkle out” as to designers’ intended messages? After this talk, you, like Mrs. Jennings in the 1995 film, will be “terribly good at winkling”: in this case, deciphering costume “codes” used by designers of period films of any era.

We will have five outstanding speakers to delight us on our two Jane Austen Days in Philadelphia:

In 2017, some of our amazing and generous Regional members in Cape May, New Jersey donated a beautiful hand-crafted quilt. In our humble attempt to do justice to their exquisite craftsmanship, the Region has decided to raffle off this one-of-a-kind heirloom. During the 2020 Jane Austen Days in Philadelphia event, we will finally give away this amazing quilt. If you would like a chance to win this quilt, you can either use the "Buy Now" button below to purchase a raffle ticket (or five), or you can purchase a raffle ticket (or five) at the 2020 Jane Austen Days in Philadelphia.

You can click the images below to view this exquisite quilt...or better yet come to the 2020 Jane Austen Day in Philadelphia to see it in-person! 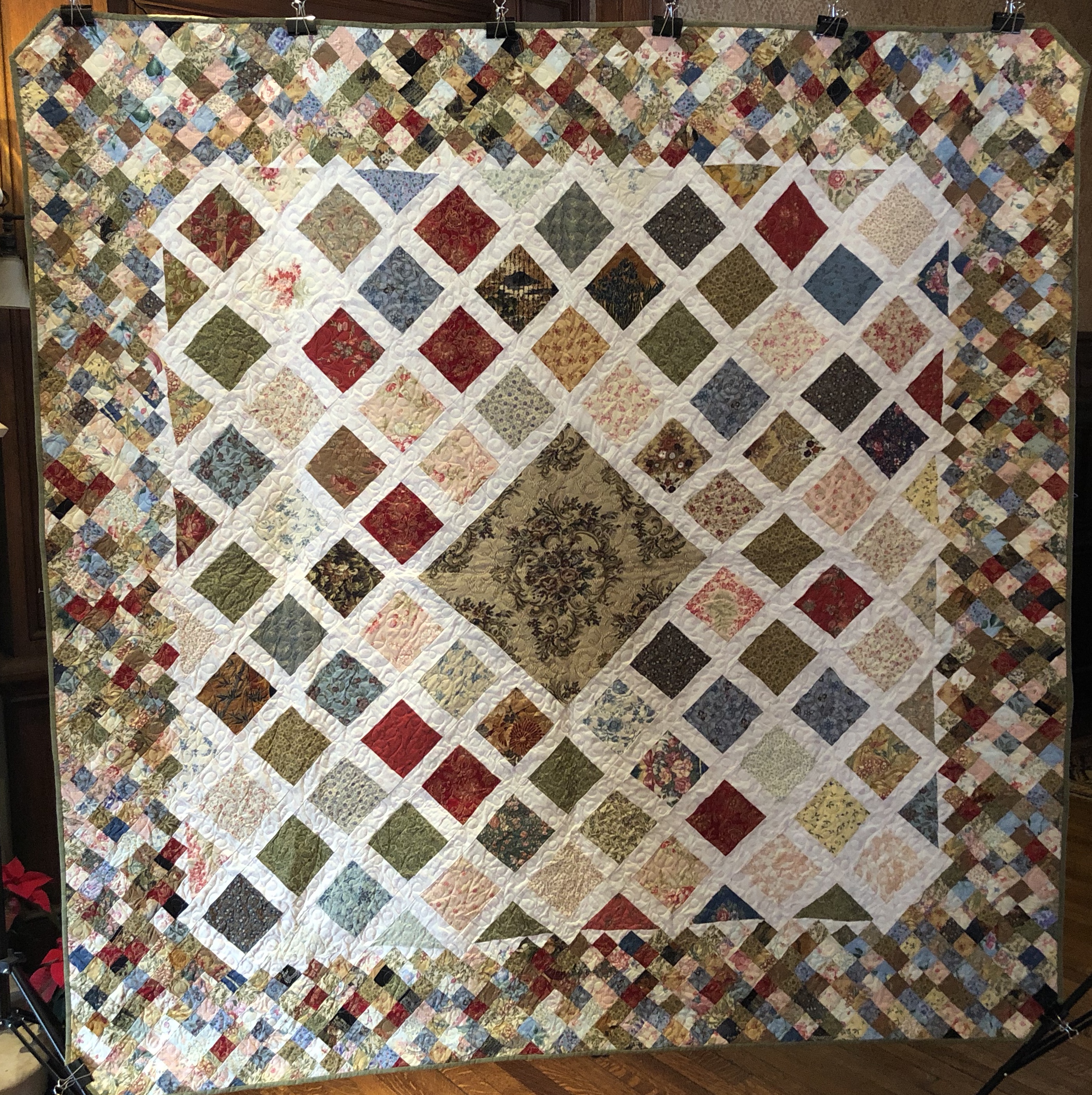 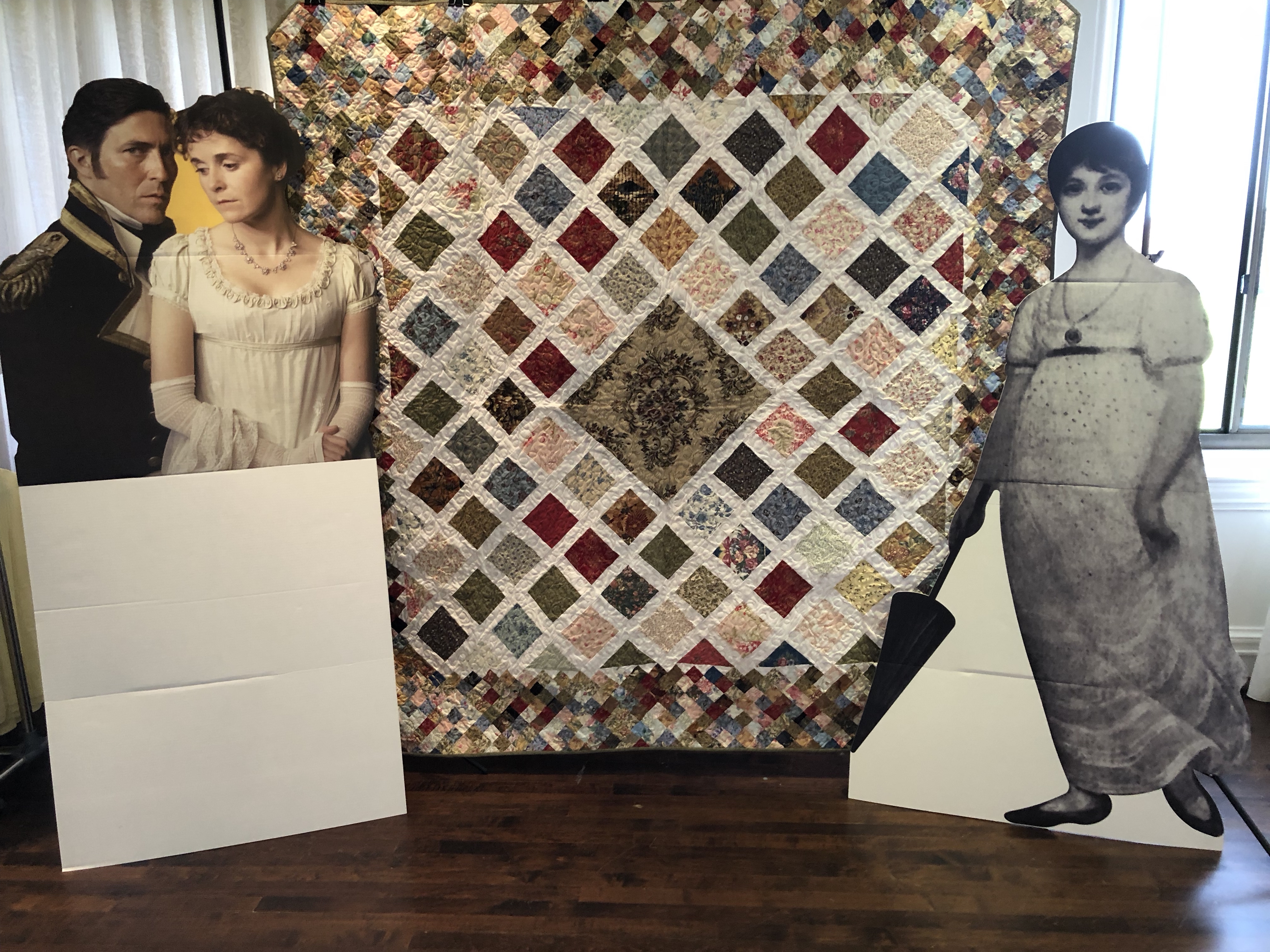 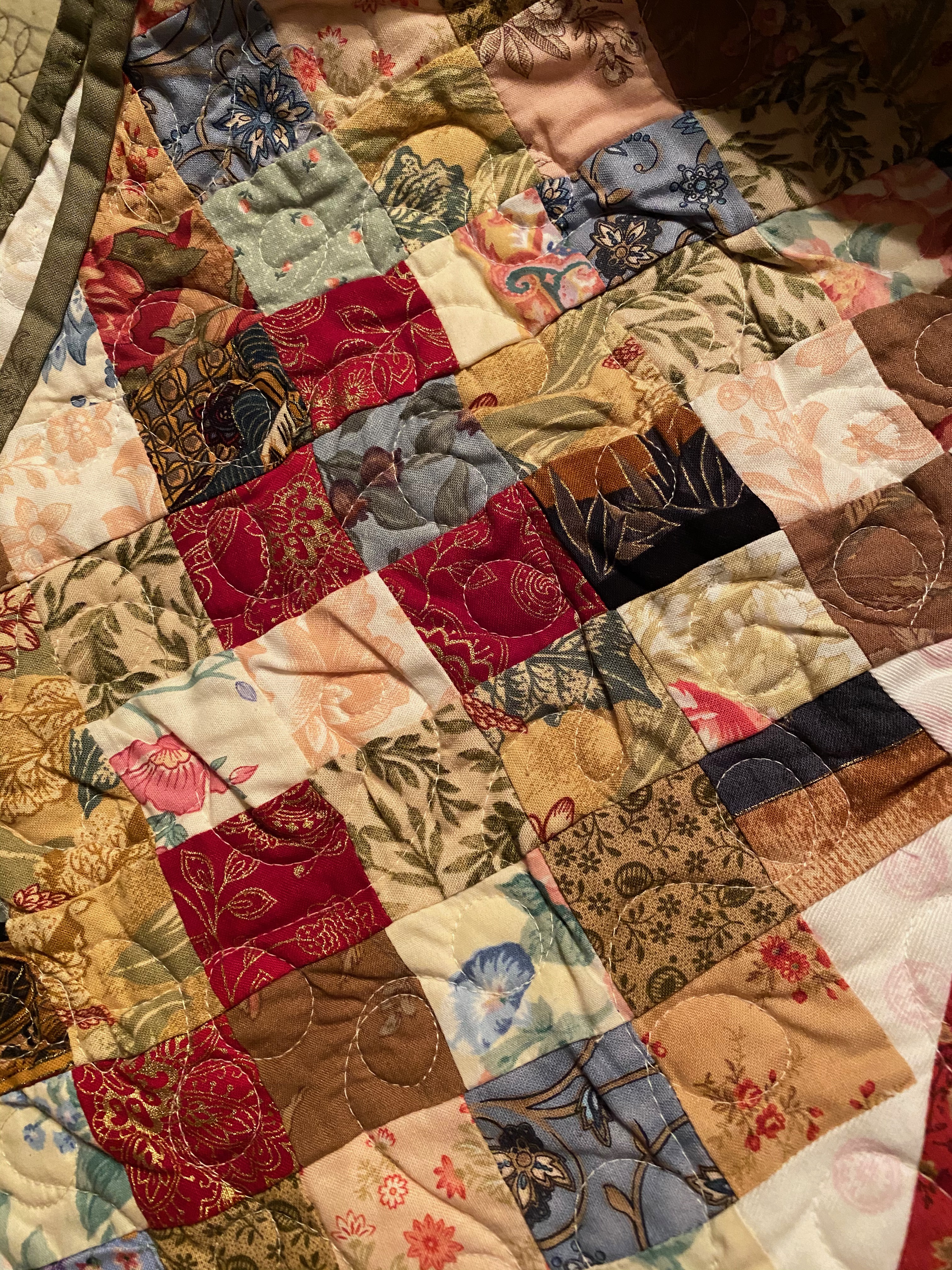 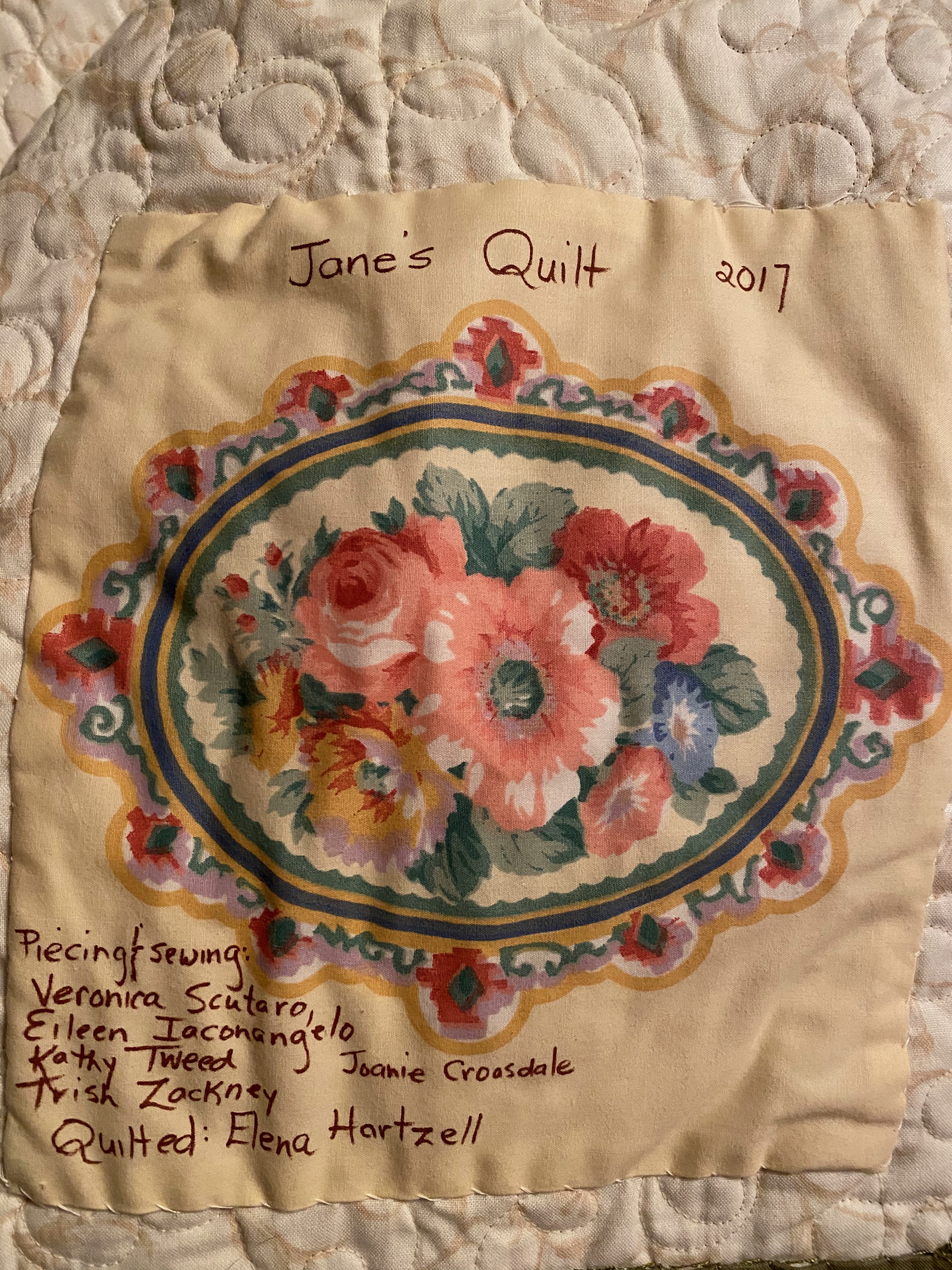 You do not need to be present to win this quilt!

Jane Austen Days in Philadelphia is supported in part from funds provided by the JASNA Eastern PA Region and the generosity of the Free Library of Philadelphia.